On our way from Glasgow to the Lake District we felt obliged to check out Gretna Green. All I can say is that every tourist in the area had the same idea, including some who I’m convinced had no idea what it was really about. Mark certainly didn’t until I enlightened him. 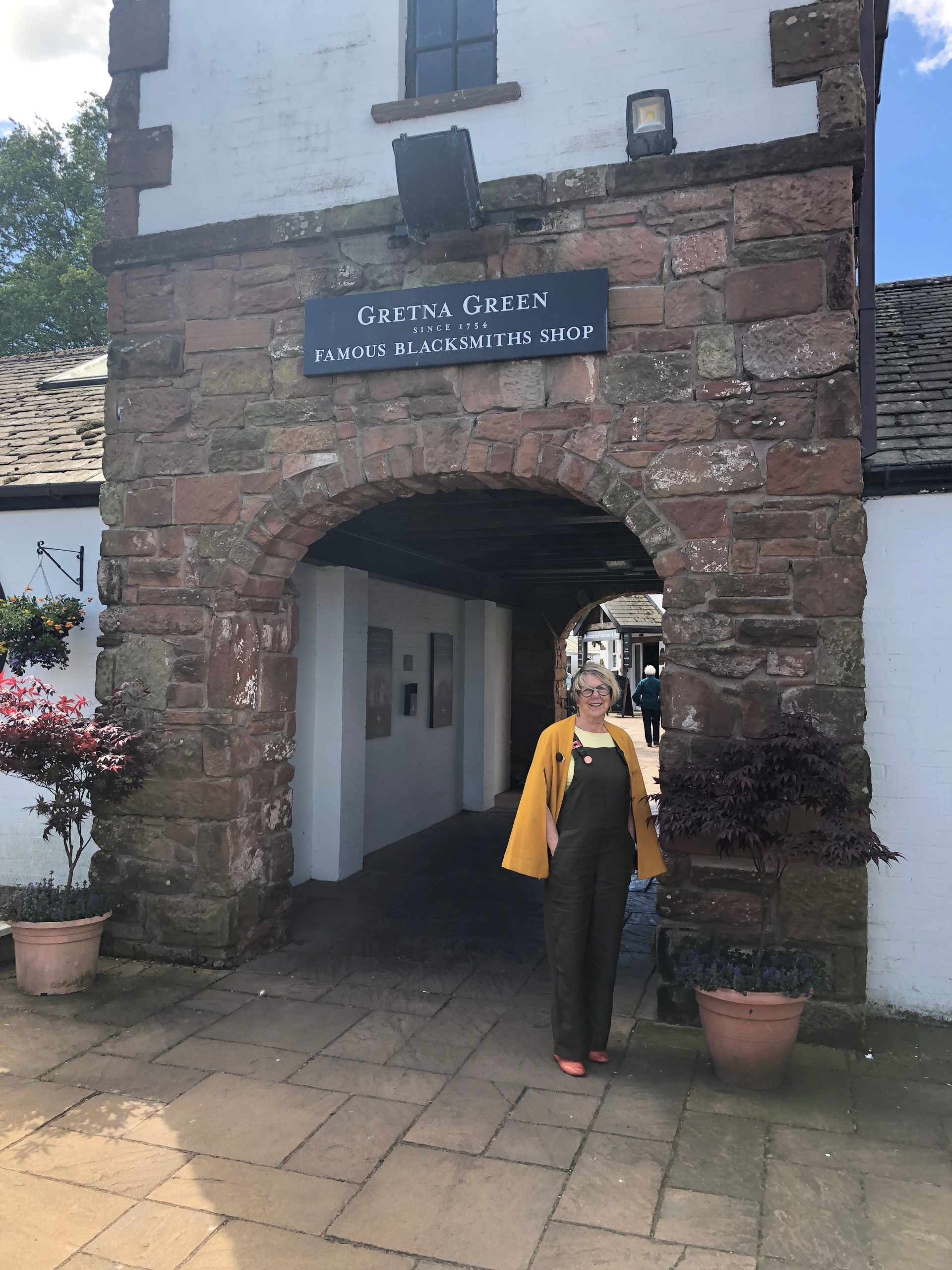 A tiny doorway surrounded by horseshoes which leads to “the” anvil. I suspect that a lot of those 19th century elopers would have needed a bit of luck.

A modern sculpture which I quite liked.

Onwards to Carlyle, and this is the Citadel erected in 1810 to guard the southern end of the city and to provide additional defence for the castle and originally had a wall enclosing part of the city some of which still exists. The red sandstone is very beautiful, but it’s impossible to get a photograph without cars, signs and posts!

We were heading to the Lake District with the intention of visiting Cumbria and my cousin after whom I am named. I haven’t seen her for twenty years and I don’t think she’s changed at all!

She has a beautiful garden with a gorgeous view over fields with quite high hills in the background.

Mark and I decided that we needed to walk to the top of the hill, and it was deceptively steep. We walked through this lovely avenue of trees in a pine plantation, with filtered sunlight.

The view from the top was spectacular. That’s the Irish Sea you can see in the middle distance. I love the clouds and the sun shining on the sea. The photograph cannot capture the beauty.

There was a cairn at the top and four Dutch tourists were having a picnic at the bottom of it. They insisted I climb to the top and add another stone. Very precarious, but I did it!

As we were getting ready to leave after a delightful stay we got a photo with the four of us, which will be very precious to me.

After sad goodbyes we made our way to Whitehaven on the coast. Such a delightful spot.

The shops are beautifully coloured and the whole effect is most attractive.

I think I photographed the whole town, I liked it so much. 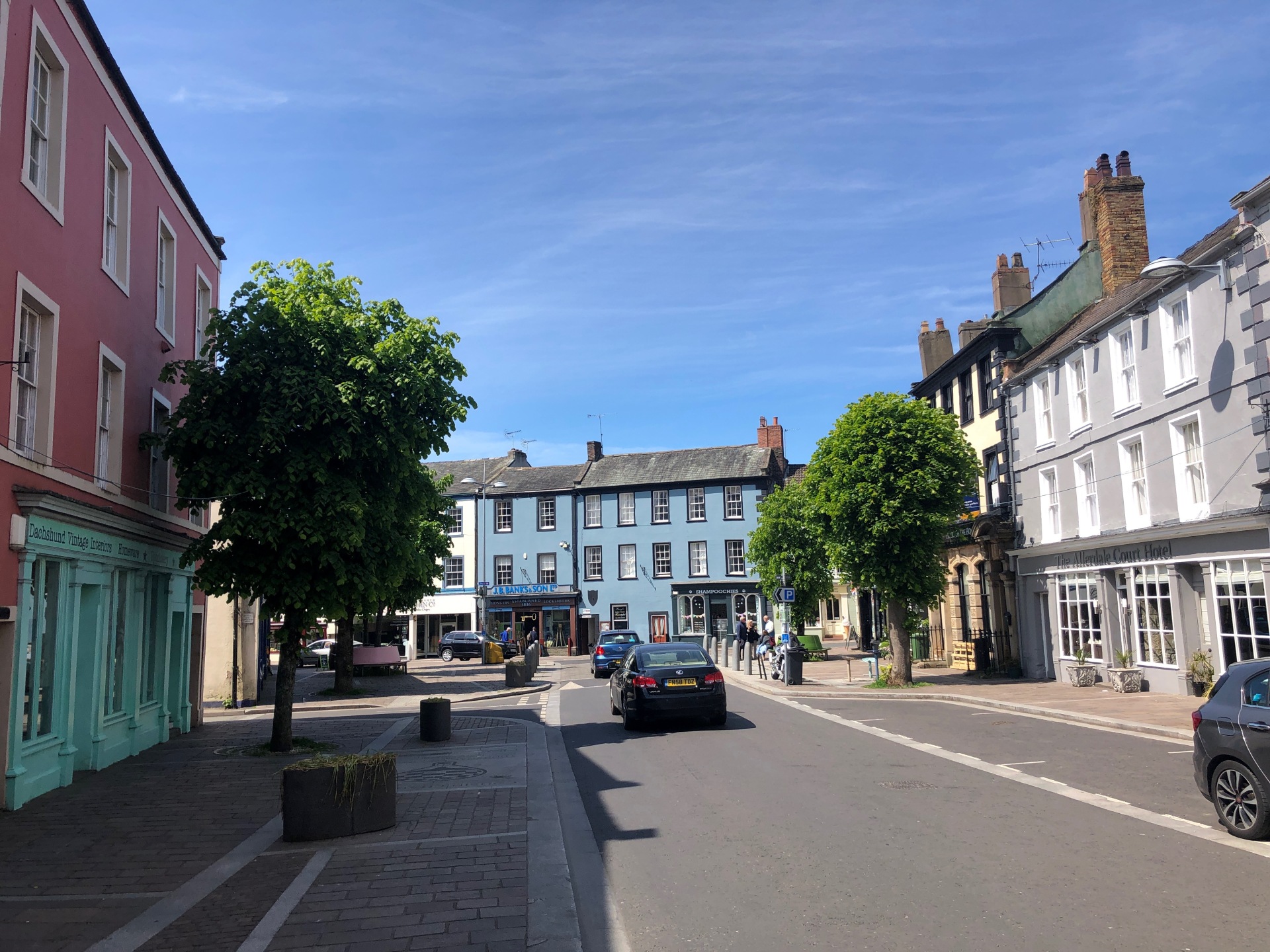 We were driving along minding our own business when we saw a signpost to the Castlerigg Stone Circles. I am fascinated with stone circles and these were erected 4,500 years ago. Stone circles provided a setting for ceremonial and ritual activities, social meetings and the movement of goods such as animals and quarried stone. They were obviously central to the community they served.

There is talk of a missing stone which stood outside the circle and it is thought to have been removed to allow the field to be ploughed. I find it amazing that this circle has survived at all. There is no protection given to them, but I think they are considered quite common throughout the UK.

We moved on to Wordsworth country. I was struck by this really beautiful wall where someone has created that pattern on the top. I suspect that walls such as this are quite common, but I rather liked the bucolic scene behind as well.

This is the village of Grasmere, where William Wordsworth made his home.

I had his poem “I wandered lonely as a cloud” in my head as I could just see how he wrote it here:

I wandered lonely as a cloud
That floats on high o’er vales and hills,
When all at once I saw a crowd,
A host, of golden daffodils;
Beside the lake, beneath the trees,
Fluttering and dancing in the breeze.
Yes, that’s all I could remember!

I took a photograph of this house – perhaps I thought it was one of his, there may have been a sign. In the interests of full disclosure, I don’t know but I’m including it anyway! 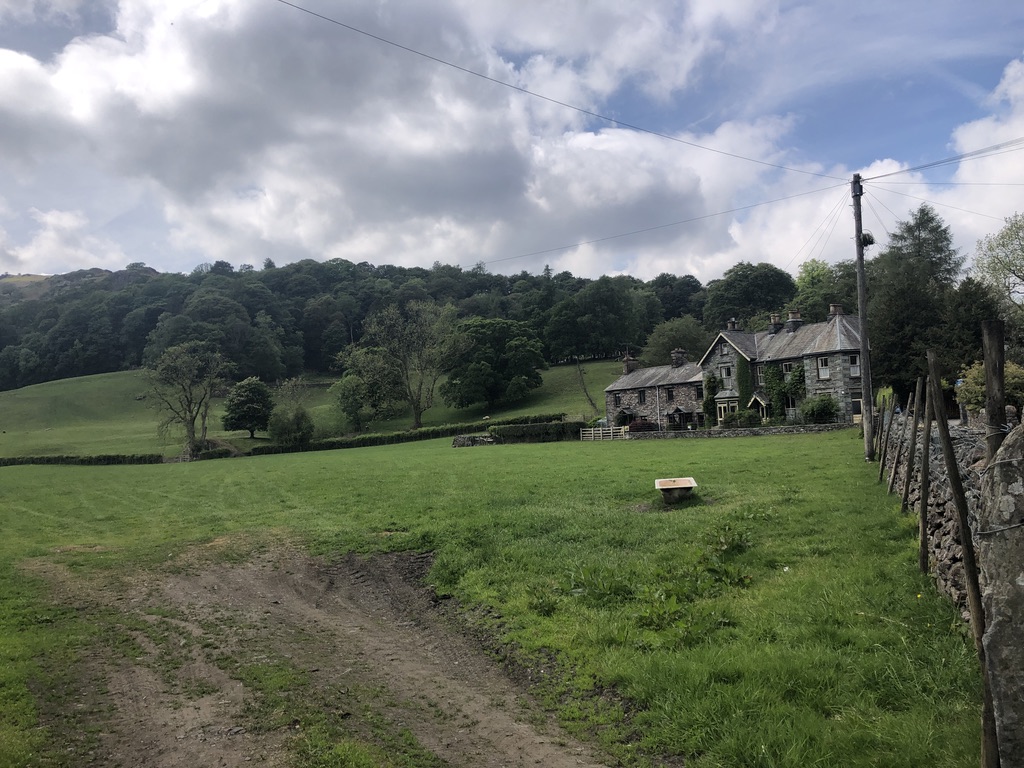 We passed through Windermere and it was nothing like my childhood memories. No photographs were taken as Mark was determined to leave the hordes of tourists as fast as possible!

We found a really nice B&B on the outskirts of Kendal and took ourselves for a walk around town. The obligatory church

but I liked the buildings around the church square. A very charming area. 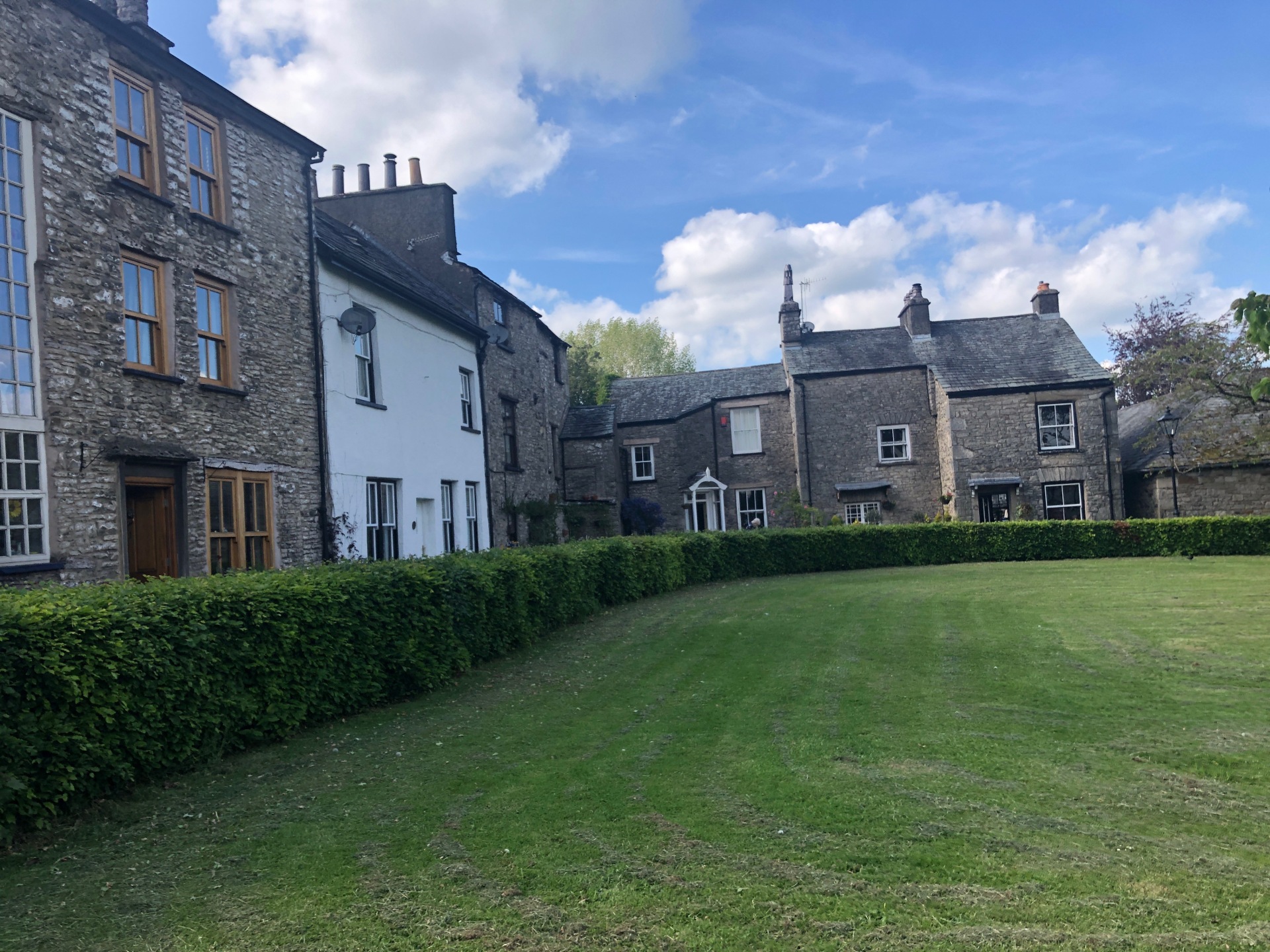 The river and bridge were lovely with swans swanning about and the odd duck as well.

We probably didn’t do the Lake District justice as it was so busy, so we kept driving south.

I really wanted to go to Preston, which is a strange choice as it’s not the most beautiful of cities, but it’s very important to my family.

I already mentioned that my paternal grandmother was a Preston. I’m going to give you a quick history of my family, so scroll down to the next photo if you have no interest.

I am going to paraphrase from a book my father wrote to give an understanding of our family history. There is some conjecture about the the origins of the name and some believe it came from “Praestans” meaning “excellent”. There is another view that the name was assumed from the landed estates in Mid-Lothian, Scotland, and a further view that one of the owners was priest and thus Preston comes from Priest Town, which is the origin of the name for the city of Preston.

Whatever the origin of the name, it was borne by the family as early as the time of Malcolm I of Scotland, who reigned from AD 944 to 953. The first recorded Preston was Leolphus de Preston (great name!), born 1139 who lived in the time of William, surnamed the Lion, who reigned in Scotland from AD 1165 to 1214.

My father’s given names were William Preston and the third generation of Prestons was William de Preston, one of the Scottish nobles chosen by Edward I of England, at the death of Margaret (the Maid of Norway) to arbitrate between Baliol and Bruce, the main contenders for the crown of Scotland. I am the 34th generation in a direct line from that first Leolphus de Preston and so this is a very long winded way of saying I am claiming a Scottish ancestry which makes me very happy.

After a quick look at the rather unprepossessing city of Preston, we moved on to Chester which was much more to my liking.

I wandered around taking photos of all the magnificent buildings. These windows make my heart sing.

Chester has a lot of verandahs and balconies, which seemed to make it extra charming.

The Town Hall is another fine building in a row of fine buildings. When we were there there was a group of school kids protesting about something. I’m not sure what it was but I applaud them!

So many beautiful buildings but my eye was caught by this one. It is the Westminster Coach and Motor Car Works on Northgate very close to the Town Hall. It wasn’t until I began reading about the building that I realised that the facade is made of terracotta, which I found rather extraordinary.

This is the Victorian east gate clock, which is splendid in its over the top decoration. The gate stands on the site of the original entrance of the Roman fortress of Deva Victrix. It is  is said to be the most photographed clock in England after Big Ben, which surprised me.

I was delighted to see this steam tractor crossing our path; just trundling down the road. 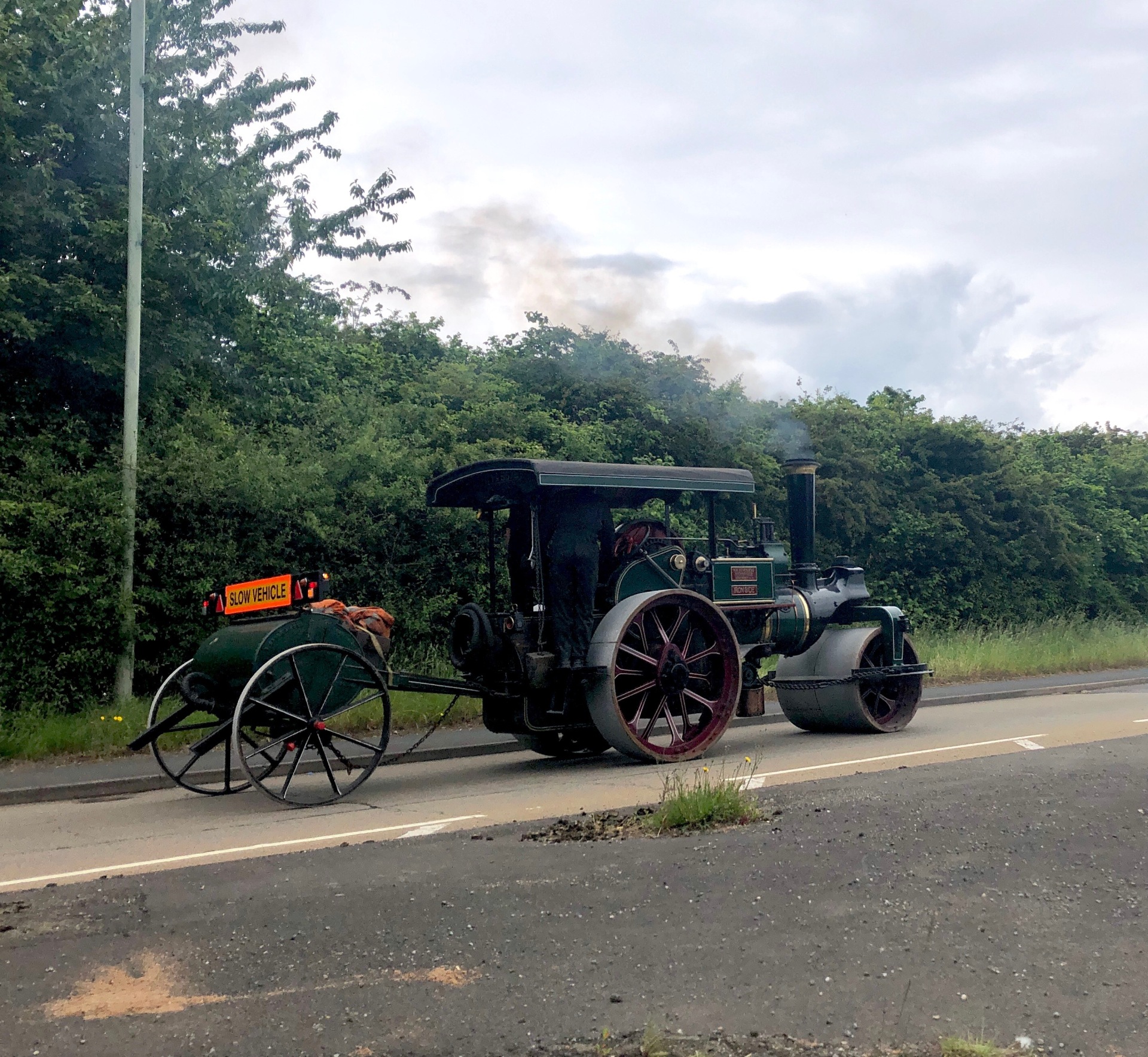 Unfortunately it was a bank holiday and half term school holiday so accommodation was in extremely short supply, and given that we don’t book more than a day or two in advance, we were beginning to think we might have to sleep in the car over the weekend, but we finally found accommodation, out in the wilds of rural Shropshire and it’s rather lovely to be buried in the countryside and not near traffic noises. On the way I spotted this converted water tower – one of the best I’ve seen. I can just imagine the views that it has. 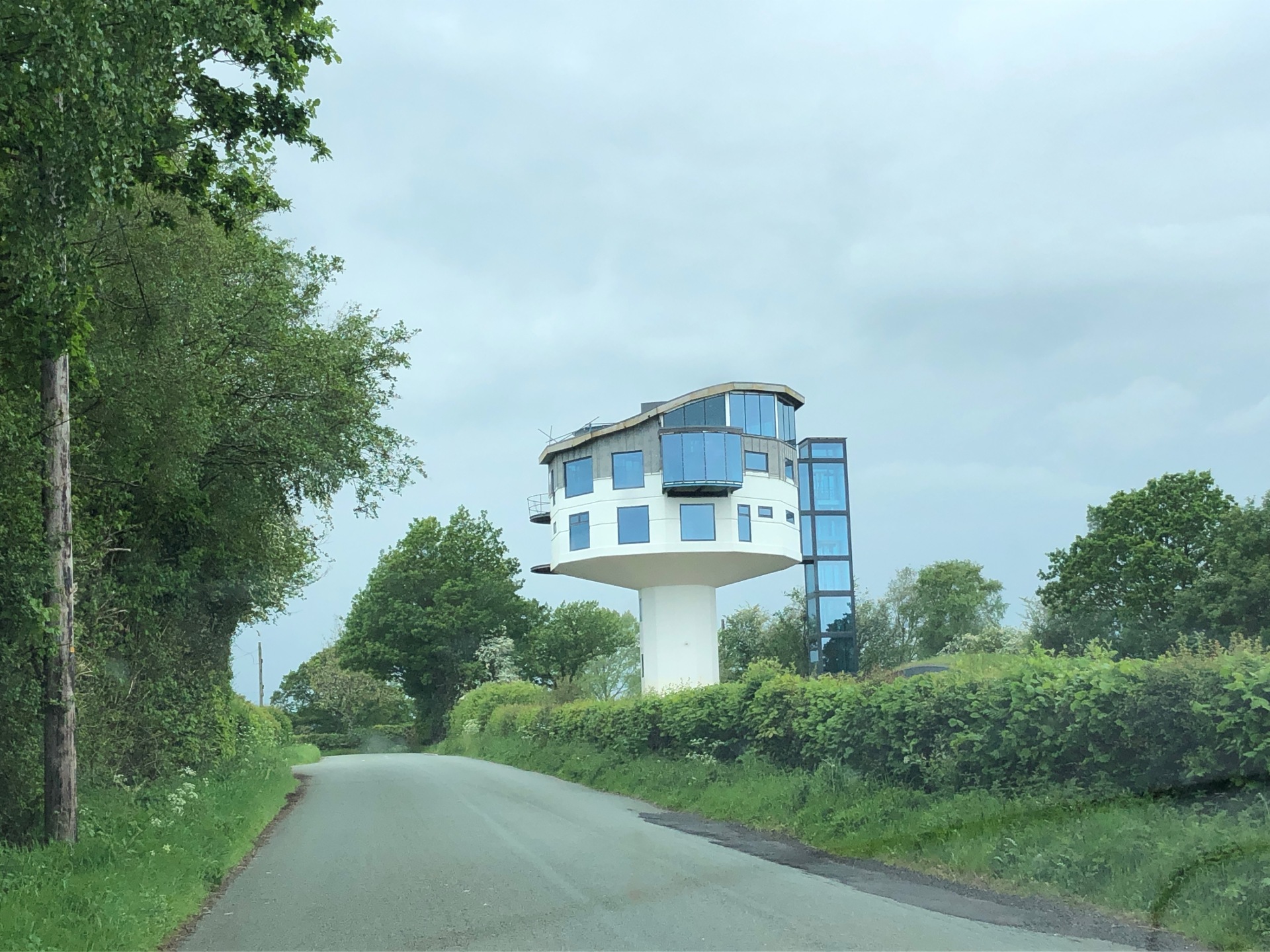 This lovely barn is just down the road from where we’re staying. Nothing special about it except for the post box embedded in the wall. How I love the quaintness of this island!

We are currently in Wales which has been on Mark’s bucket list for some time. More on this next time!

8 thoughts on “Lovely Lake District and beyond”