There are a couple of IG challenges that I am participating in, one of which is for a wrap dress for Sew together for summer, and the other is the Make a garment a month sewalong, the theme for April being “Alternative April”. I thought I might combine the two challenges and make an alternative wrap dress! I also had the extra incentive of needing a LBD for Bridgette’s hen’s party, so, my dress is black and I have therefore ticked three boxes with the one dress.

Many years ago I had a weird dress that was part wrap dress, part toga. I never wore it so gave it away, but recently I have had a yearning for that dress, and so was born my alternative wrap dress.

I started with McCalls 6559, which is a tank style tube dress and worked from there. A hunt through my stash revealed some black knit left over from making some tights and a t-shirt last winter, and which still had tails of fabric attached, so I decided it would be perfect for the dress.

First I cut out the dress, but had a bit of a think before I sewed it up – it’s already sewn up in this photo, I just wanted to show the basic dress à la the pattern.

I took all the long tails left over and began adding them here and there, joining some pieces together to make them long enough to wrap round me. I did try to envisage how they would look, thinking about the “wrap” component of the dress.

I added two fairly narrow tails into each armscye before I bound them with more knit. The curved pieces were already cut into the fabric so I left them, I think they were left over from the sleeves of a t-shirt, but one piece had an extra tail, so I seem to have finished up with five dangly bits instead of my planned four.

I planned to make those curved bits go round my neck as they are starting lower down in a side seam and are on a wide piece of fabric. This is the main wrap and all the other pieces just flowed from this. I noticed that the hem wasn’t level, but decided to leave it asymmetrical as it would have highlighted my ankles had I levelled it up, and that’s something I never want!

It’s pretty difficult to show all the different wrap components due to the way they wrap and the black fabric, but this one shows the main wrap, plus the extra ones round my torso. Unfortunately it also shows a bra strap as I wore my most favourite teddy which makes me feel feminine and glamorous, but unfortunately isn’t black! I won’t make this mistake again.

A side view showing the way that big wrap piece looks round the back.

I thought I might add a video of me doing the wraps. This is the next day, so Sunday hair and no makeup! It took several takes and every time I do it it comes out a little differently; and I fumble around a lot. I would consider having fewer wraps next time.

I had to take the resolution right down for WordPress to accept this video, so sorry for the poor quality.

Every edge except the neck and armholes was finished with rolled hems done on the overlocker. The whole dress was just stitched on the overlocker and took a couple of hours to put together once I had pinned in the dangles.

A couple of final shots of me wearing the dress out in the wild at Bridgette’s hen’s party. So here I am with Bridgette who looks adorable in a floral crown, with her mother at her other side (and yes, that pesky bra strap shows!) 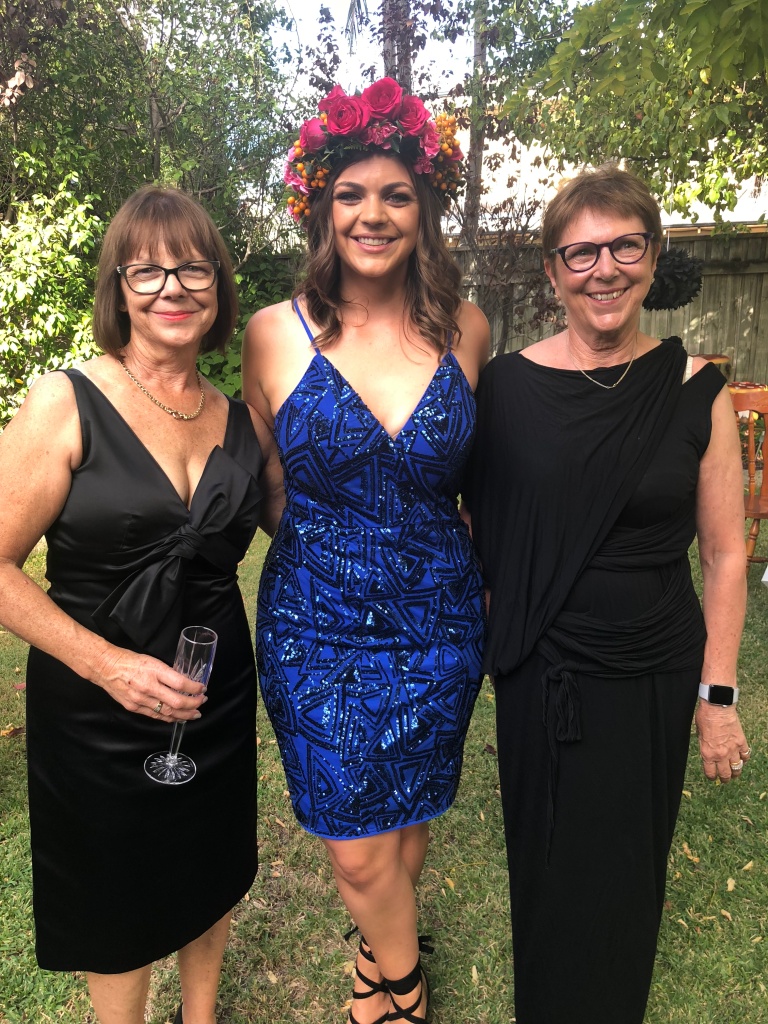 Just for fun I thought I’d put a screen capture of a video of Tom where he was asked questions about his and Bridgette’s likes and dislikes. This is the beginning when he was feeling rather nervous. Bridgette had to answer the same questions. It was good fun and many jelly shots were consumed when wrong answers were given! 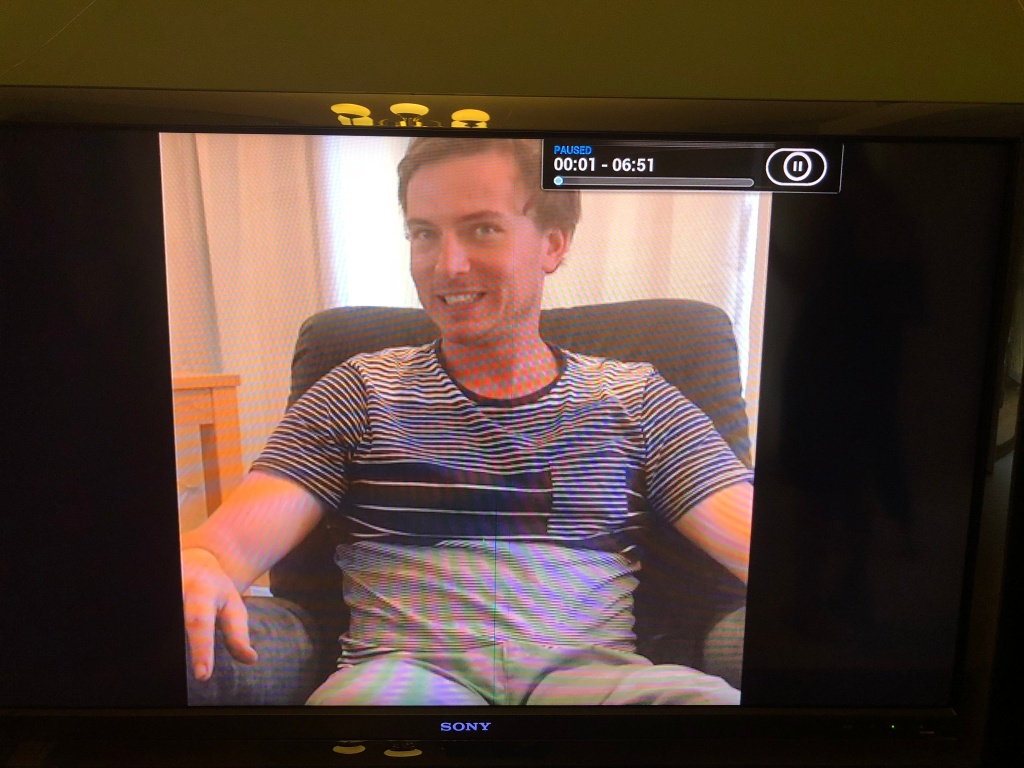 It seems as though no hen’s party is complete without one questionable activity and ours was a drawing class. I really liked the fact that everyone wore black which made Bridgette stand out. 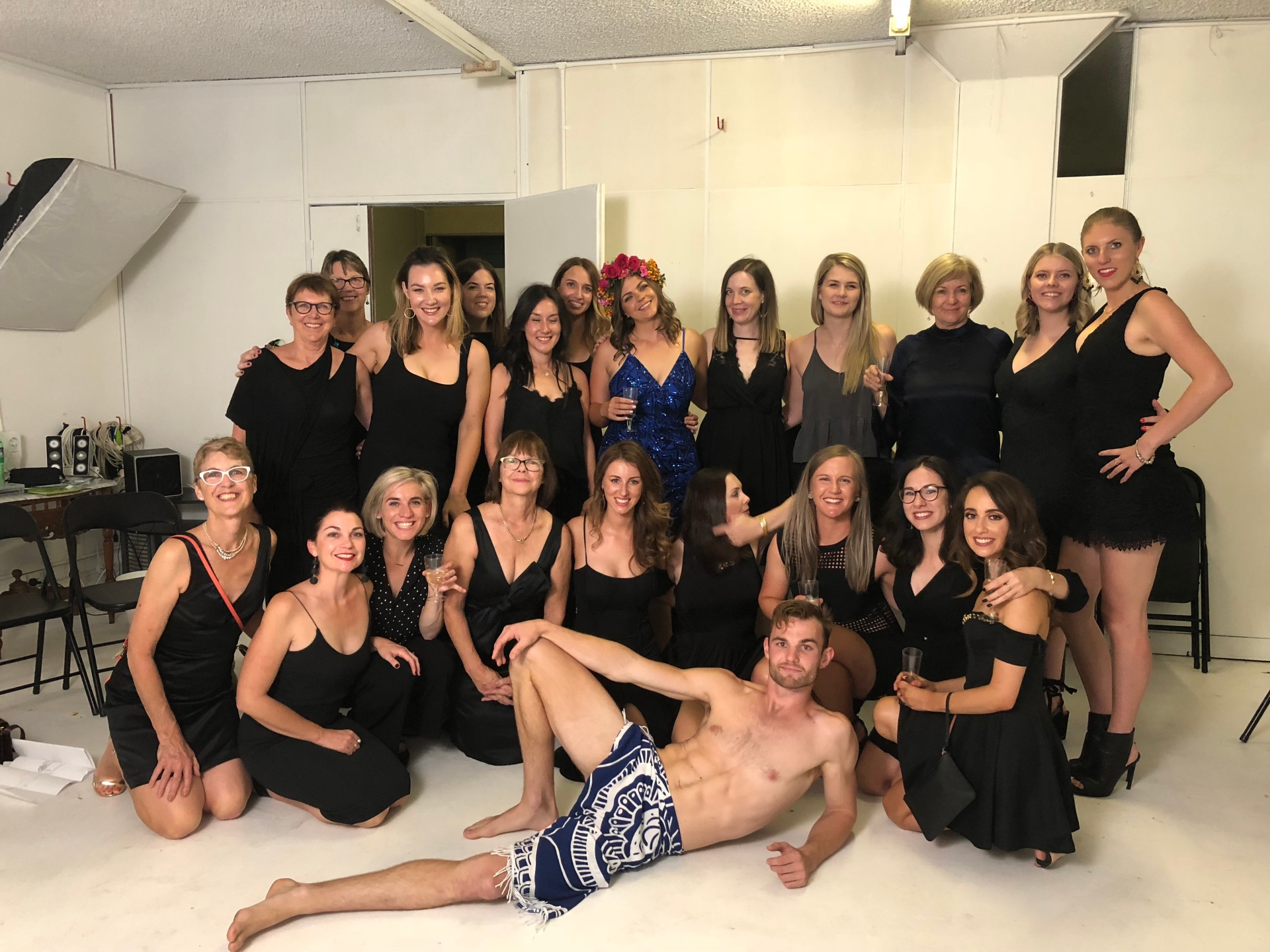 27 thoughts on “Wrap dress with a difference”